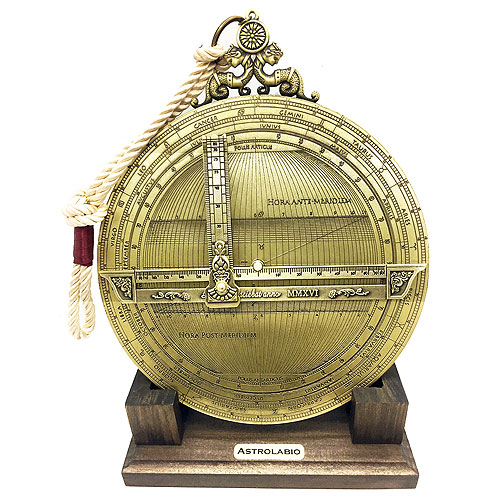 Free Shipping in Europe
In Stock

Reproduction of an universal astrolabe realized in accordance to Juan de Rojas y Sarmiento in the 16th century.

The Spanish astronomer and mathematician Juan de Rojas y Sarmiento presented to the European public the Orthographic Projection (1550).
This projection was successfully applied in this universal astrolabe that offered remarkable advantages over its predecessors because it could be used in any latitude.


Function.
An astrolabe is a very ancient astronomical computer for solving problems relating to time (what time is it ?) and the position of the Sun and stars in the sky.

Astrolabes are used to show how the sky looks at a specific place at a given time.
This is done by drawing the sky on the face of the astrolabe
To use an astrolabe, you adjust the moveable components to a specific date and time. Once set, much of the sky, both visible and invisible, is represented on the face of the instrument.
Typical uses of the astrolabe include finding the time during the day or night, finding the time of a celestial event such as sunrise or sunset and as a handy reference of celestial positions.
The typical astrolabe was not a navigational instrument although an instrument called the mariner's astrolabe was widely used in the Renaissance.


History.
The history of the astrolabe begins more than two thousand years ago.
The principles of the astrolabe projection (stereographic projection) were known before 150 B.C., and true astrolabes were made before A.D. 400.
The astrolabe was highly developed in the Islamic world by 800 and was introduced to Europe from Islamic Spain (al-Andalus) in the early 12th century.
It was the most popular astronomical instrument until about 1650, when it was replaced by more specialized and accurate instruments.


Accuracy.
The sky map of this astrolabe is the one of the 21th century.
This universal astrolabe is fully functional.
It's accuracy is:

for the Northern latitudes,

for the Southern latitudes.

Video showing the different parts of an astrolabe (2 minutes)

Customer reviews of the A220

NO review is available in english.


NO review is available in english.

All orders are payable in . Prices displayed in an other currency are only approximate and not contractual. They are based on the exchange rate of .
Mouse-over displayed price shows the euro contractual price.
© 2005-2020 by Glegl.